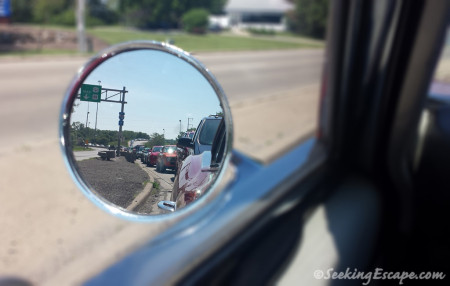 Well, that was quite the “vacation”.  Actually, I wouldn’t call it a vacation.  I’d call it an adventure.  My typical vacation usually consists of going to some island and generally relaxing.  I’ll sleep until I feel like getting up, maybe take in a few tourist sites, definitely a lot of beach time, and go to sleep whenever.  This vacation was quite different.

The official route was about 1500 miles, driving about 200-300 miles per day.  Getting to/from the starting and stopping points is up to you and was another 1500 miles in my case.  The standard routine is:  you get up in the morning, drive 200-300 miles, attend a car show in the next town, have dinner, check out the cars in your hotel parking lot, get some sleep, and repeat.  Sounds pretty simple, and pretty interesting to be in a new town every day.

Starting with the first evening, my buddy and I got into a late-night wrenching session (more work on the car).  Even though I sunk over $4000 preparing the car for the 3000 mile trip, I still was quite concerned about the reliability of the car.  The car has only been driven 300 miles in the last 7 years, so there was no recent long drives to prove its worthiness.  I was specifically concerned about overheating, despite having a new radiator and water pump.  These concerns were somewhat verified when I saw the engine temperature climb above where it should be operating, and we were in the coldest part of the trip, the farthest North part of the trip, in Wisconsin.  We still had to drive South to the Gulf of Mexico, through hot Alabama, Mississippi, and Louisiana.  So while still in Wisconsin, on that first night, we decided to get rid of all of the brand new radiator coolant, flush out the engine, and replace it with just plain water, and an additive that race/drag cars use called WaterWetter.  Without going into the details, plain water with WaterWetter (or equivalent) is better at transferring heat than radiator coolant and water.  So we were hoping to reduce the engine temperatures by shedding this heat.  We ended up staying up well past midnight doing this to the car, so the first day’s drive was on little sleep.

It rained much of the first day’s drive, and even though we left fairly early, we made it to the first stop fairly late in the day, but there was no more rain and we still saw some pretty cool stuff. 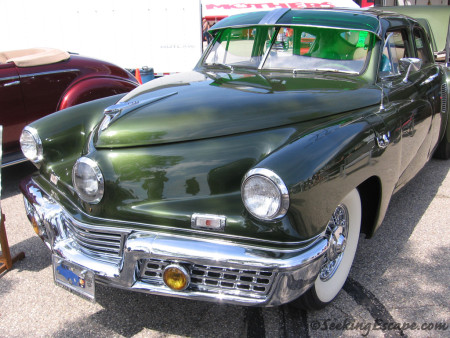 There were only 51 Tucker Torpedo’s built before Tucker went out of business.  (One sold at an auction in 2012 for over $2.6 MILLION dollars!) 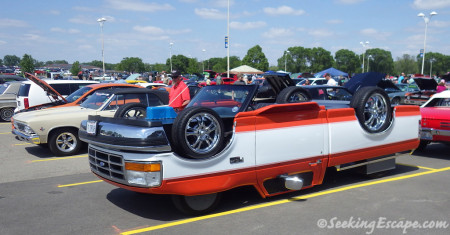 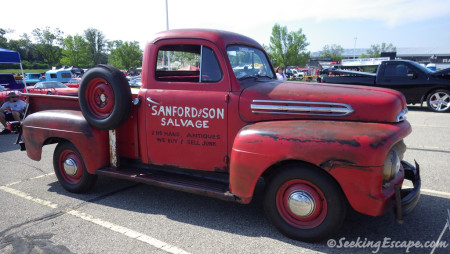 The one and only, from the mid-70’s TV show, Sanford and Son.

It was off to a good start.  We were meeting lots of interesting people, seeing some crazy cars, making friends, eating some good food, and checking out the countryside during each day’s drive.  We had a little scare one evening when a bad storm brought hail.  I feared going out to the car to inspect the hail damage.  Luckily, the hail never got bigger than marble-sized, and the thick 1960’s steel body panels withstood the beating without denting.

Unfortunately, it seemed like we were always showing up late to the car show each day, despite leaving earlier than the suggested departure time.  When we were in the planning stages, I was thinking “200-300 miles, divided by 60 miles per hour, is like 4-6 hours of driving, including potty, food and gas stops”.  Reality was different.  We weren’t pounding interstate miles.  We were taking the smaller highways and side roads, driving through lots of small towns. 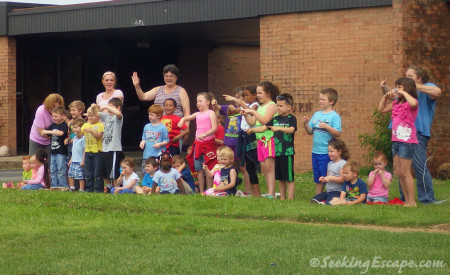 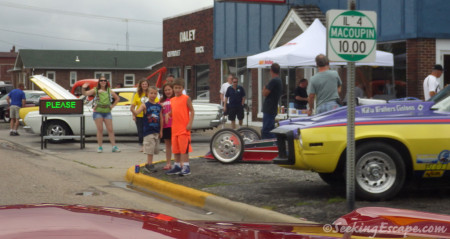 And I loved driving through the small towns.  Wouldn’t have had it any other way. Except it was taking us 7-10 hours to get to the next car show destination, giving us only a couple hours before the show was over.  We weren’t getting to see much of the cars.  So we adjusted.  Instead of hitting the road slightly before the suggested 8am, we were getting up at 4:30-5:30am each day, grabbing a bite of hotel breakfast, and hitting the road as early as possible.  During a normal work week, I don’t get up before 6:30am, and here I am on vacation getting up each day around 5am?  This isn’t a vacation!

Or is it?  While it may not have been restful, like my normal vacation, it was certainly an adventure filled with great views, interesting sights, witnessing a world record, and meeting really neat people. 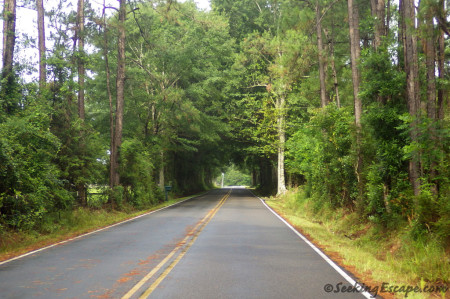 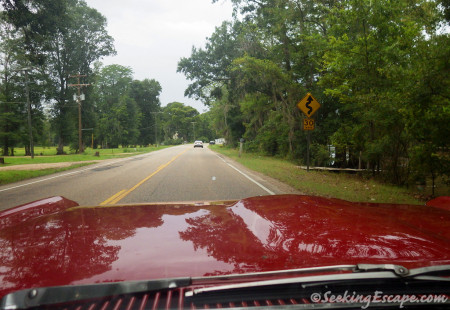 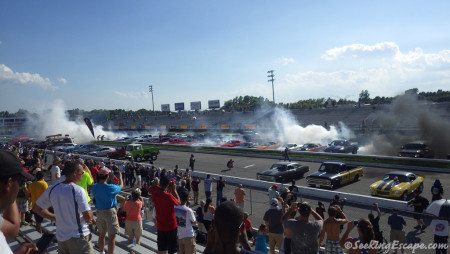 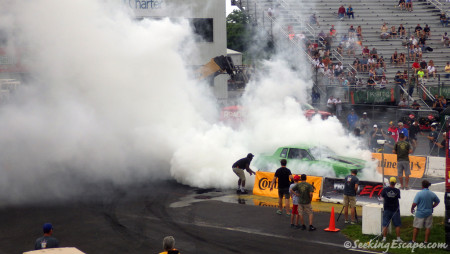 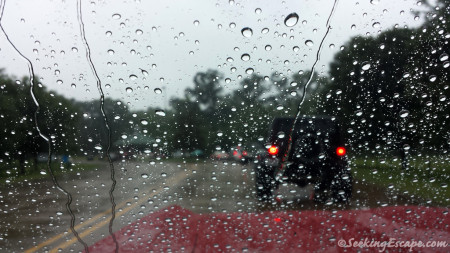 There was still plenty of rain 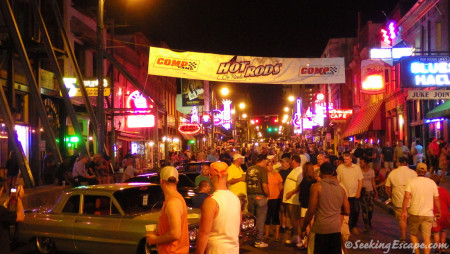 Blocked off Beale Street in Memphis, TN, to have a little car show

And what of my fears of breaking down or overheating?  I guess our preparation paid off.  We did not break down, nor overheat, despite the near 100°F temperatures, high humidity of the Gulf, and long lines of standing still and idling. The same can’t be said for everyone else, but what’s better than being surrounded by thousands of car enthusiasts? Is there a mechanic in the house?  Yeah, nearly everyone there.  So breakdowns are only a temporary setback. 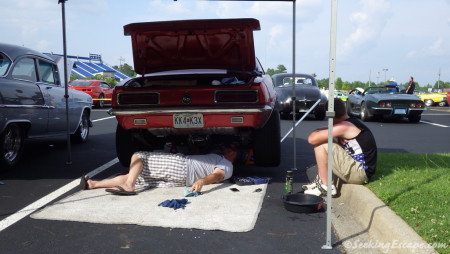 Something is wrong under there 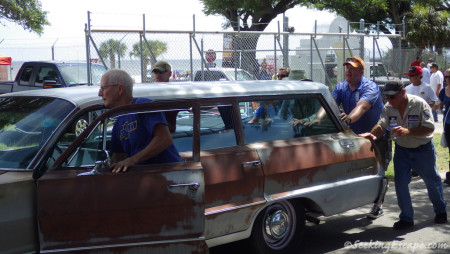 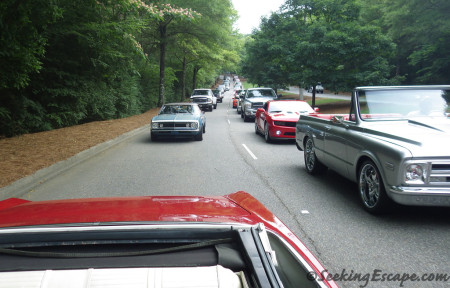 Always long lines of cars not moving much 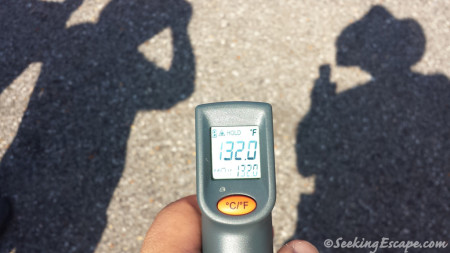 The pavement was intensely hot

Now that it’s done, am I looking forward to doing it again next year?  Yeah, not so fast.  While it was a great adventure, it’s not something I’d like to repeat anytime soon.  Would I do it in the future?  Yes, I think so, but maybe when I have more vacation time.  Like in early retirement.  I just don’t get enough vacation at my current employer and I really value my beach vacations and relaxation with my limited time away from work.