I used to ride a Harley Davidson motorcycle every day, until a kid fell asleep behind the wheel and nearly hit me head on and put me in the hospital for a while back in 2005.  Since then, I’ve only been on a bike a few times.  When I was looking for something to do in Siem Reap, Cambodia, one thing that caught my eye was a motorcycle tour.  There were a few choices, from a couple hours to multi-day excursions.  I decided to select a full-day trip that was 8 hours long and 125 km (78 miles).

I spent the previous two days trekking around temples all day, being driven from temple to temple in Cambodia’s version of a tuk tuk, called remorque, which is actually a bit different from other tuk tuks from around the world.  They are two-wheeled covered carriages that can seat 4 people (or more) and pulled like a trailer by a motorbike.  The weather in Cambodia in September was quite hot, around 90F/32C every day.  I enjoyed the wind generated by the open air tuk tuk, and sweat my butt off every time we stopped.  So I thought I’d welcome spending a bunch of time cruising around on a motorcycle without many stops.

It turns out it was probably the absolute best day/adventure of my entire three week trip.  We got out of the city and managed pot-hole filled roads to view the beautiful countryside.  The destination was the Beng Mealea temple, which is a stunning, heavily overgrown temple complex.

Sharing the road with the cows

Narrow “road” through the countryside of Cambodia

Took a break along a lake

Beng Mealea Temple, some of it in ruins

On the way back, we took even more remote “roads” (paths?) and went to the Banteay Ampil Temple, which was tiny compared to the other temples I’ve seen over the last three days (even Google doesn’t have much on it).  We drove the motorbikes on a tiny trail through the woods, and in a small opening was this temple.  No parking lots for bus-loads of tourists.  No parking lot at all.  We drove the bikes right up to the temple, and I even got a video of me driving around the entire temple.  We were the only two people there.  It was awesome. 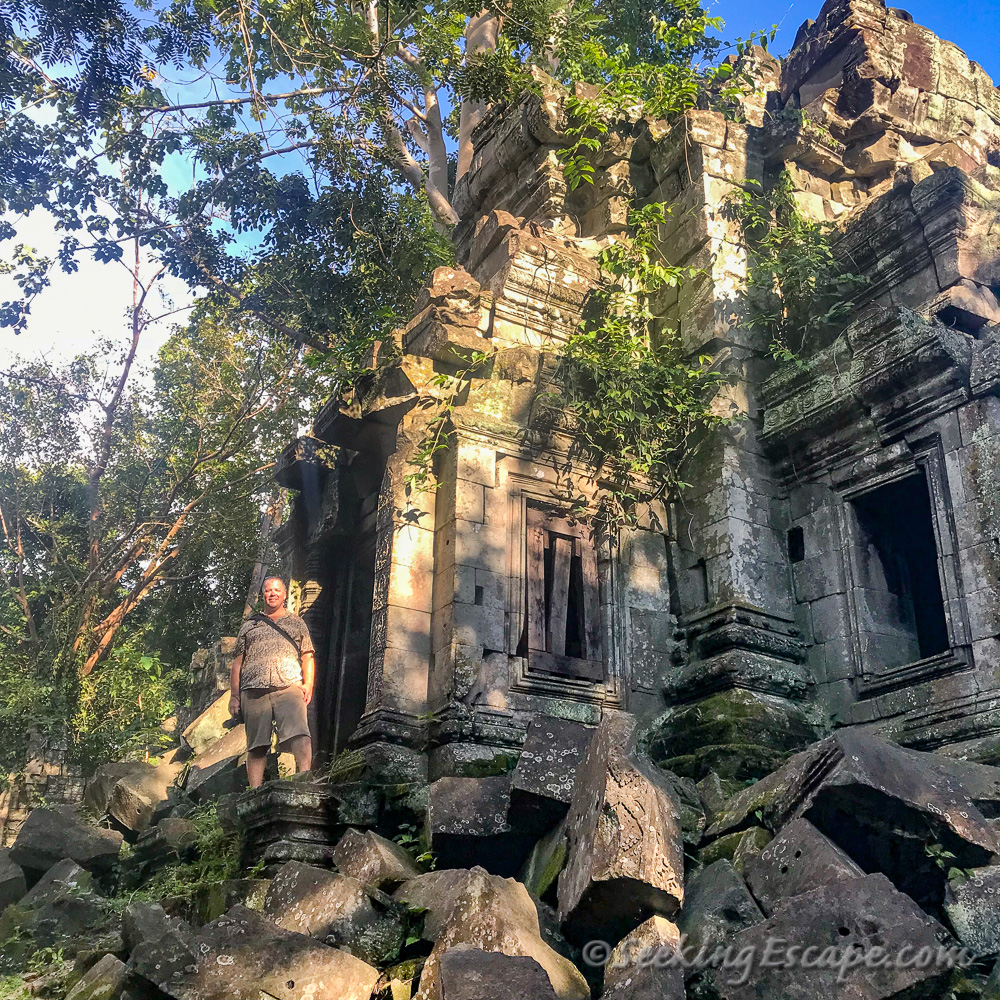 Getting ready to try to not fall in the river!

The floating village of Kompong Phluk

There was one other tourism thing I did while in Cambodia, partially from the suggestion of a friend.  I went to see the “floating village”.  The one near Siem Reap is in the village of Kompong Phluk, an hour or two overpacked tour bus ride from the center of Siem Reap.  After traveling down the village road, you suddenly come to a water flooded section of the road, and all you see is water all the way to the horizon down the straight road.  The buildings and power poles and power lines continue down the road, but everyone just parks the buses and cars where the dry road ends and gets out.  You then hop aboard a tour boat pulled right up alongside the road.  You take this boat for a ways, dodging trees, shrubs and even some houses.

It’s interesting to observe people who live in these houses surrounded by water.  While it’s called a floating village, maybe houses-on-stilts village would be more correct, but less romantic.  Their daily commuting vehicle is a boat.  Their bathing is done right off their front porch.  I’m not sure, and I probably don’t want to know, what’s done with their bathroom waste.  It probably goes in the same place they get their cooking and drinking water from.  And this isn’t a river with flowing water…it’s stagnant.

No, that motorcycle doesn’t float. There’s actually a road there covered with some water.

Heavy traffic for the commute

Colorful, with lots of houseplants

While Cambodia is quite poor in general, it seems that this area is even more poverty stricken.  Most everyone seems to be in good spirits and friendly, it’s quite apparent that their livelihood heavily depends upon the tourists to their village.  Young mothers and/or young children paddle tourists around for a few minutes for $5 USD, which would have been much nicer if their sole purpose of the “tour” wasn’t to paddle you to a hidden flotilla of other women on boats filled with food, drink and other merchandise.  You raft up with these sales pitch boats and hang out there for a while, a captive audience.  And if you politely refuse to purchase something for yourself, then they ask that you purchase something for the lady paddling your boat.  “Food for their family…she’s working hard.”  “How about some school supplies for their children?”  Even once you are out in the wide-open Tonlé Sap lake, away from the houses, the boats still paddle up to  your tour boat every 2 minutes asking if  you want something.  They were polite, and they are just trying to make some money.  I get it.

Oh the enthusiasm – Waiting to paddle the tourists around

Waiting for sunset at Tonlé Sap

The annual wet season flooding is apparent here, no defined banks of the Tonlé Sap lake.